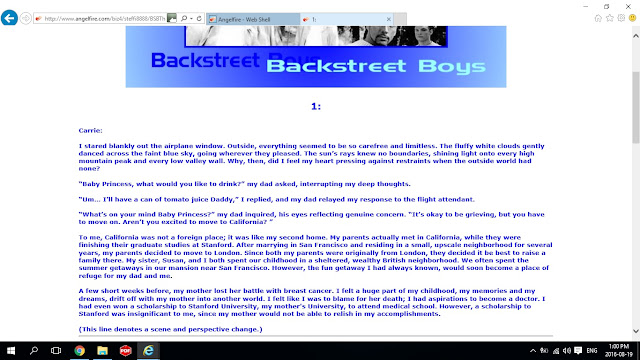 I'mma schism the interwebs with my new brainchild "THROW UP Thursdays," where a THROWback I UPdate in a better, more entertaining version of "Reacts."

This is my old text, in normal, Arial font.

This is my new text, in underlines.

THE NICE GUY NEVER GETS THE GIRL

aka, Some cliche fanfic 'bout wub. This was my first fanfic at age 14. Be kind, Steph.

I stared blankly like my mind right now out the airplane window. Outside, everything seemed to be so carefree and limitless. The fluffy white clouds gently danced across the faint blue sky, going wherever they pleased. The sun’s rays knew no boundaries, shining light onto every high mountain peak and every low valley wall. Wow, just ... Can descriptions of the clouds, sky, and sun ever NOT be try-hard in a story? Why, then, did I feel my heart pressing against restraints when the outside world had none? Fine fourteen-year-old drama.

“Baby Princess, what would you like to drink?” my dad asked, interrupting my deep thoughts. Yes, my parents divorced and sad me created the fictitious dad I always wanted.

“What’s on your mind Baby Princess?” my dad inquired, his eyes reflecting genuine concern. “It’s okay to be grieving, but you have to move on. Aren’t you excited to move to California?” NO, I'm not excited. I'm fucking grieving. Leave me alone.

To me, California was not a foreign place; it was like my second home. 'Tis true. In real life, I have family in Cali. My parents actually met in California, while they were finishing their graduate studies at Stanford. Ah Stanford. DJ Tanner, Jesse Spano, and my uncle convinced young me to REALLY want to attend Stanford. Turns out, I was too poor and dumb. After marrying in San Francisco and residing in a small, upscale neighborhood for several years, my parents decided to move to London and pound there. Since both my parents were originally from London, they decided it be best to raise a family there, and then Brexit out. My sister, Susan, and I both spent our childhood in a sheltered, wealthy British neighborhood. We often spent the summer getaways in our mansion near San Francisco. In case you missed the obvious, I'M FUCKING RICH IN THIS STORY!!!  However, the fun getaway I had always known, would soon become a place of refuge for my dad and me. Get ready.

A few short weeks before, my mother lost her battle with breast cancer. Damn, shit just got REAL quick. Now I'll feel pricky with my dicky comments. I felt a huge part of my childhood, my memories and my dreams, drift off with my mother into another world. Regular Dylan Thomas right there. I felt like I was to blame for her death; I had aspirations to become a doctor. FFUUCCKK I had even won a scholarship to Stanford University, my mother's University, to attend medical school. What the actual fuck? However, a scholarship to Stanford was insignificant to me, since my mother would not be able to relish in my accomplishments.

(This line denotes a scene and perspective change.)

Uh, why'd this story have to go all dark like that?! I'mma leave this for a few weeks before I return to it.
Posted by The Whorely Virgin

The Whorely Virgin
Here's more about marvelous me, Stephanie Si: I nickname myself TheWhorelyVirgin.com for good reason. Yes, I'm really a 35-year-old virgin. And, as you'll see, also an EXPERIENCE whore. I've BEEN AROUND (to all 7 continents including Antarctica, all 5 oceans, and 101 U.N. countries). And I'll TRY ANYTHING, such as ...